Paradise Valley is a small, affluent town in Maricopa County, Arizona. It is the wealthiest municipality in Arizona.[5] The town is known for its luxury golf courses, shopping, real estate, and restaurant scene.[citation needed] According to the 2010 census, the population of the town was 12,820.[3] Despite the town's relatively small area and population compared to other municipalities in the Phoenix metropolitan area, Paradise Valley is home to eight full-service resorts, making it one of Arizona's premier tourist destinations. It is also known for expensive real estate.[6]

The Paradise Valley Unified School District is one of the largest in the state, though like many other institutions with the name Paradise Valley, it refers to the Phoenix village, and not to the town.

Paradise Valley is the wealthiest suburb of Phoenix.[7][8] It is known primarily for its many resorts and expensive real estate.[9] However, its history dates back to a more agrarian society.

After the initial European settlement, Paradise Valley was first used for cattle grazing. In the 1880s, when the land was being surveyed so it could be developed into agricultural lots, the name "Paradise Valley" first came into use, being given by surveyors from the Rio Verde Canal Company and its manager at the time, Frank Conkey.[10] According to the official town website, this name may have been chosen due to the abundance of spring wildflowers and palo verde trees.[11] Mainly an agricultural area during the 1800s and the first half of the 1900s, the area began to be settled after World War II, on large, one to five acres (4,000 to 20,200 m2) lots for which it became known.

As the neighboring settlements of Phoenix and Scottsdale began to grow and annex adjoining areas, the residents of what would become Paradise Valley were concerned that the qualities they most valued would be lost if they were consumed by their larger neighbors.[12] These residents formed "Citizens Committee for the Incorporation of The Town of Paradise Valley, Arizona", which collected enough signatures to take to the Maricopa County Board of Supervisors. The petition was granted by the supervisors, allowing the town of Paradise Valley to be incorporated on May 24, 1961.[11]

According to the United States Census Bureau, the town has a total area of 15.5 square miles (40 km2), all of it land.

The central terrain of Paradise Valley is dominated by Mummy Mountain. Other landmarks include Camelback Mountain on the southern border and the Piestewa Peak mountainous area on the western border. 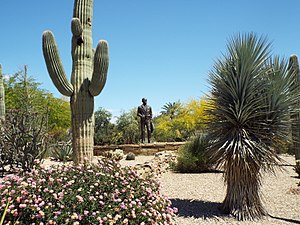 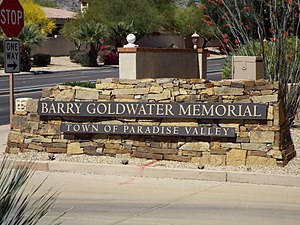 Paradise Valley's motto, coined by residents, is "there is a reason we call this valley 'paradise'".[1]

The mayor and six town council members are the elected representatives of the Town of Paradise Valley. The council is composed of six members who are elected to serve four-year staggered terms. In 2010, voters approved the direct election of mayor. Scott LeMarr became the first directly elected mayor in 2012. The council still selects its vice mayor from among its members. Jerry Bien-Willner, elected in 2018, is the current mayor. The chief of police is Pete Wingert.

Several charter schools also are in the area, including nearby Great Hearts Academies and BASIS Schools, as well as private schools such as Phoenix Country Day School.

According to Paradise Valley's 2014 Comprehensive Annual Financial Report,[18] the top employers in the town are:

If you are interested in one of our listings you're welcome to drive by and inspect the property from the exterior. Some of the properties are vacant so you are welcome to look through the windows to see the interior of the property. However, we value the privacy of our clients. If the property is listed as occupied we request you do not disturb residents.

Next Steps
The next step is to complete a secure, no-obligation Identity Statement for the opportunity to preview the interior of the property.

Countertops are the main points of a kitchen or a bathroom since this is the area which covers a lot of surface. A lot of home owners nowadays consider granite as the best and the most cost-effective material for countertop. Granite possess a natural beauty which can be enhanced more by a polished sheen. This […]

Where is your cool reprise from the hot spring and summer weather? While installing cooling units can be a quick fix, it’s also one of the most expensive.  The lesser known truth is, cooling your home can be affordable.  These are the window repair and window maintenance tips that will make your home more energy efficient […]

Most of us are veterans of moving from one home to another, having done it at least once or twice in our lives. It’s always a stressful and involved process—usually more involved and stressful than we remember, until we’re in the midst of it!  And certainly, we’ve got most of the moving checklist down:  Begin collecting […]

More from our blog...

Is Your Backyard Ready for Summer?

Getting Rid of Mildew

Declutter your Office and Living Room with these Cord Management Tricks!

5 Things to Remember About Bath Remodels

6 Simple Steps For A Clean And Organized Garage

Eliminating Mildew in your Bathroom and How to Prevent its Return

De-Clutter Your Home With These Organizing Tricks!

Important Additions to your Moving Checklist